Showing posts from September, 2019
Show all

By Regent Park Focus - September 27, 2019
The Leaders We Rely Upon, September 27, 2019 This week on Radio Regent News & Views, we will be exploring the following stories: 1. A photo of Justin Trudeau from 2001 was recently released to the public which showed him dressed as Aladdin, wearing a painted-on brown face and a turban. It also came to light that Trudeau did an impression making fun of American singer, songwriter, and activist, Harry Belafonte. It was expected that Trudeau's votes would decrease after these revelations, but his votes actually increased. News and Views host, David Wall and co-host, Theo Nazary, discuss why. 2. David Wall and Theo Nazary go on to consider the possibility of an impeachment and the negative impacts that it could have, after a whistleblower reported on a conversation that took place over-the-hone between President Trump and the President of Ukraine involving an alleged request from Trump to have Ukraine investigate the son of his potential election candidate, Joe Biden, in exc
Post a Comment
Read more

Powerful By Nature - Take Back the Night & Reporting Sexual Assault

By Powerful X Nature - September 09, 2019
Date:   September 9 th , 2019 Hosts :  Chantal & Rhiannon Guests : Deb, Counselor at Toronto Rape Crisis Centre/Multicultural Women Against Rape Topic : Take Back the Night & Reporting Sexual Assault* *Trigger Warning for Discussions of Sexual Assault & Suicidal Thoughts In the latest episode of Powerful by Nature, your hosts talk about the fight to end sexual violence and violence against women, with a focus on the Take Back the Night movement, and talk about what surviving sexual violence can look like. We talk about where you can get support in Toronto if you have experienced sexual violence and take you step by step through the reporting process. We talk to a survivor about her personal experience surviving and anonymously reporting a sexual assault and then interview Deb, a Counsellor at Toronto Rape Crisis Centre about their crucial services and why Take Back the Night remains a critical feminist movement.  We want every survivor who listens to thi
Post a Comment
Read more 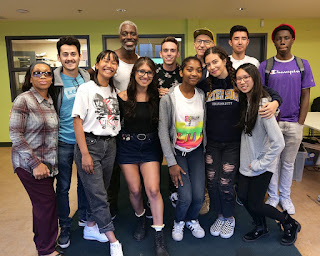 Our summer program has ended last week and we are already missing our outstanding team. They have been very active and super talented and working on their own documentary project and also Catch Da Flava radio programs every Wednesdays under our supervision has thought them so much on the process. It was very successful. We wish them all the best in their future in media as they aspire to be and always happy to welcome them back.
Post a Comment
Read more
More posts
All articles on Catch da Flava Online are copyrighten to FOCUS Media Arts Centre. Please contact us to ask permission if copying any material from this website.