Showing posts from March, 2010
Show all

By Focus Blogger - March 30, 2010
On our radio show on March 31, 2010 we had Toronto Community Housing Revitalization Consultant Lancefield Morgan and Revitalization Project Manager Liz Root, as guests to talk about the Regent Park Redevelopment. The show was hosted by Rahul, Abdi and Ryan and we discussed a range of issues related to the redevelopment. One of the issues we touched upon was how the redevelopment will impact on the community. We also discussed Regent Park's association with crime.
Post a Comment
Read more

Secret Societies: The Illuminatus and Freemasons

By Focus Blogger - March 23, 2010
Our radio show on Tuesday March 23, 2010 will feature a pre-produced show on two secret societies the Illuminati and The Free Masons. lluminati (plural of Latin illuminatus, "enlightened") is a name that refers to several groups, both historical and modern, and both real and fictitious. Historically, it refers specifically to the Bavarian Illuminati, an Enlightenment-era secret society founded on May 1, 1776. In modern times it is also used to refer to a purported conspiratorial organization which acts as a shadowy "power behind the throne", allegedly controlling world affairs through present day governments and corporations. In this context, Illuminati is often used in reference to a New World Order (NWO). Many conspiracy theorists believe the Illuminati are the masterminds behind events that will lead to the establishment of such a New World Order. Another group associated with the Iluminati is the Free Masons, another purported secret society. Generally, theori
Post a Comment
Read more

By Focus Blogger - March 23, 2010
On Tuesday March 16, 2010 we did our (Abdi, Atharul, Shamdi and Sud) radio show was on the subject of technology. During the show Sud hosted a discussion about role technology plays in our lives and the race of those in the industry to outdo each other to build faster, smaller and better technologies. Are blackberries, social media and computers helping to build stronger human relationships or are they alienating ourselves from each other. Technologies are part of almost everything that we do. Can we stop or reduce the ever increasing levels of technologies that we use in our lives? For example there are Amish communities that have rejected the use of technologies in their lives. What is the future? No one ever imagined 20 years ago that there would be a camera in a telephone. Should we be concerned about the new developments in the field that are integrating technologies in the human body (GPS computer chips in children that enable parents to know where they are at all times)? What
Post a Comment
Read more 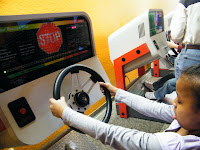 The final day of March Break featured a full day field trip to the Ontario Science Centre. The 16 youths who took part were divided into groups of three of four (this writer for example, supervised the four boys who took part in the trip). The trip to the Centre by streetcar, subway, and TTC bus was uneventful. Thanks to the excellent planning on the part of the Science Centre, we didn’t have to wait in line—it’s nice to be treated like a VIP! Once we were inside, the day was left deliberately unstructured—the kids were free to roam the Centre with supervisors in tow. Despite the crowds, the kids maintained a positive attitude and engaged in a variety of interactive activities. We took lunch a little early which worked out extremely well since the cafeteria was filled to capacity by noon. The highlight for the boys was a presentation at the Ontario Science Centre’s planetarium which was fun, educational, and offered a well-time break from walking. By the end of the day, everyone was
Post a Comment
Read more 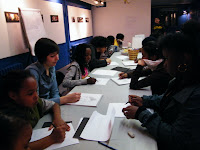 Andrea, Focus’ resident Comic Book program instructor conducted a half day workshop on Thursday morning for the 14 youths who were taking part in the program that day. Instruction focused on the basics of illustration and by lunch, all participants had created their own mini comic book. The participants remained engaged throughout the workshop and showed a really positive attitude. The second half of Thursday’s program consisted of a sidewalk chalk drawing exercise led by a group of graduate students from the University of Toronto who wanted to engage with the kids to discuss the issue of empowerment. Prior to the artistic portion of the activity, they asked: “What do you think makes someone powerful?” The responses showed great insight, depth of character, and a sense of community. Once the superficial responses like money were out of the way, the kids began sharing that things like volunteering, family, and sharing lead to a sense of personal power. It was very inspiring to
Post a Comment
Read more 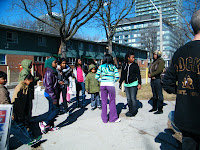 We had thirteen youths taking part in Wednesday’s activities. The morning was devoted to physical activity and teamwork—we booked gym time at the Regent Park South Community Centre. The entire group took part in a game of dodge ball that was a total hoot. The staff and supervisors were very grateful that everyone respected the fact that this was first and foremost, a fun activity. Natural competitiveness was kept in check and everyone stuck to the rule of no aiming above the mid chest area. It was quite comical to observe the more senior staff and volunteers running around trying to keep up with 11, 12, and thirteen year-olds. Following the dodge ball activity, participants broke into smaller groups to play basketball, badminton, or table tennis. Once again, a good time was had by all. In the afternoon, a local dance troupe came to the Centre to offer a workshop and instruction. The instructors led a series of exercises that focused on balance, flexibility, and rhythm. The ki
Post a Comment
Read more

By Focus Blogger - March 16, 2010
On day Two of March Break, 10 youths (seven girls and three boys) took part in a full-day photography workshop led by professional photographer Nick Kovack. Nick has been involved with the Photography program at Focus and had the advantage of already knowing many of the youths taking part in the workshop. After providing some basic technical instruction and tips on photographic composition, the youths were divided into supervised groups and given the following assignment: Go forth into the community and approach people on the street asking for permission to take their photo. Citizen/subjects were also asked the question: “What do you think about the redevelopment that is underway in Regent Park?” The exercise was an excellent opportunity for participants to work on their self confidence (approaching strangers) and to overcome shyness. The weather could not have been any more accommodating considering it is Mid-March—it was warm and sunny and there was no shortage of potential subject
Post a Comment
Read more 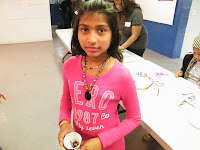 The March Break Program was a week long opportunity for children to participate in variety of different art making workshops, games and trips. The program was held from March 15th to March 19th. Day one of March Break was a big success! Many thanks to the participants, volunteers, and facilitators. We had thirteen youths taking part on the first day, the highlight of which was a jewellery workshop where everyone had a chance to create their own necklace or bracelet. The workshop was led by Colleen Clarke, a local professional designer and retailer of fine jewellery who lives in the community. She provided participants with an opportunity to learn about birth stones and astrological stones and the kids were also given instruction on how to make paper beads. Despite the fact that making beads requires patience and dexterity, the kids stuck with it and produced some very attractive bracelets and necklaces. The 11 to 14 aged youth who took part in the activity were enthusiastic
Post a Comment
Read more 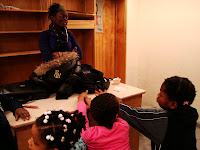 After the happy holidays, the Diva Girls Group resumed their meetings in the schools Lord Dufferin, and Duke of York, as well as at Focus. Starting off the year was activities such as playdoh scultptures inspired by the amazing, strong poetry of Maya Angelou, and studies in the imagery of dynamic painter Jean Michel Basquiat. On the media issues side, the Divas participated in a session on the Facebook/Twitter interface, where we talked about the new dangers and troubles of these internet based social networking sites. Another serious issue covered was violence at school--especially aggression targeted at young women. In a film documentary by the NFB, the shootings of Ecole Polytechnique in Montreal and it's after affects were discussed and examined. Awareness about oppression is a pressing topic, and was handled delicately. One of the Divas mentioned she had not known that small incidents can snowball into huge problems requiring community attention and healing. But at Di
Post a Comment
Read more

The Olympics - Are The Costs Too Much?

By Focus Blogger - March 06, 2010
On Tuesday March 2, 2010, our radio group decided to discuss the 2010 Vancouver Olympics and the impact that it has on Canada economically and socially. We spoke about some of the apparent advantages and disadvantages of hosting the Olympics. Our discussion led to some thought provoking questions and topics regarding the games. We spoke about the projected long term outcome of the Canadian athletes involved in the Olympics and whether the Olympics actually promoted more sport within Canada. Before ending the show we dedicated a considerable amount of time to questions and comments from the live audience. Overall, our show examined some of the often ignored concerns regarding the 2010 Winter Olympics. Blog written by: Abdulkarim Radio Group Members: Amer Chowdhury, Ishtiaque Ishraque Listen Now!
Post a Comment
Read more

By Focus Blogger - March 03, 2010
Today, RPTV continued our script development for the our new film featuring stories about various people living in an apartment building. One of the stories we were developing involves arrange marriages. We are having increased success in developing each of the characters. The discussions we are having are really great. Despite having numerous amount of difficulties in trying to come up a solid conclusion we managed to come up with a great and humorous script which really focuses on arranged marriages and family problems. RPTV is a really good program if you want to learn how to write good scripts, make new friends and learn real life valuable skills. We had great laughs along the way but in the end it turned out to be a blast. Thanks for reading our blog from your local friends Abdi and Ruhul
Post a Comment
Read more
More posts
All articles on Catch da Flava Online are copyrighten to FOCUS Media Arts Centre. Please contact us to ask permission if copying any material from this website.