Showing posts from December, 2009
Show all

By Focus Blogger - December 29, 2009
Our radio show was on December 29, 2009 was on parent relationships. The show was hosted by Shamiley, Mohammed and Thisaan. The experience of been on the radio show was worth while, as we have gained more experience and feel more comfortable. Our research on this topic has urged us to learn more and to reflect on our own personal issues that revolve around this topic. By doing so we hope to find ways to mend our relationships with our parents and to help to become strong families. During the radio show its self, we got deeper into the topics which ended up in us knowing and informing others about this topic. By me Mohammed.
Post a Comment
Read more 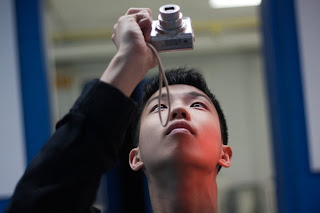 Regent Park Focus Youth Media Arts Centre had the privilege of co-ordinating our own workshop for the Our City Our Stories – powered by Canon urban youth photography contest. The workshop was held between October 22nd and December 14th, 2009 with two-hour sessions organized and run by photographer Nick Kozak. The 8 sessions covered three essential parts to documentary photography; study, shooting, and editing. Study Students spent several sessions observing and giving feedback on examples of documentary photography presented by the instructor. Slideshows were watched from the famous Mediastorm multimedia website, news photographs were viewed on Reuters and other news outlets. Students also signed up for and viewed projects and individual photos on the popular photo sharing site Flickr. The youth were given minimal instructions on how to ‘read’ photographs and what makes a strong photograph. Instead, through viewing examples students acquired basic knowledge for themes and compositio
Post a Comment
Read more 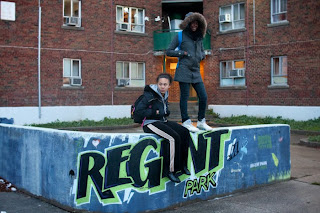 Last fall Regent Park Focus Youth Media Arts Centre coordinated a workshop for young girls in the Regent Park area. The workshop was held between October 21st and December 9th, 2009 with two-hour sessions organized and run by photographer Nick Kozak. The sessions covered three essential parts to documentary photography; study, shooting, and editing. Study Students were shown examples of documentary photography on several websites including Mediastorm.org and Flickr.com as well as Reuters.com. It was essential that the girls gain a grasp for what documentary photography is about and what makes good composition and good story-telling before sending them off to shoot their own photos. Shooting After viewing photography during several Wednesday sessions and learning a bit about how to use the Fujifilm cameras, the instructor went out with the girls to photograph in the vicinity. The students were very enthusiastic and came back with some good material to begin editing with. The yo
Post a Comment
Read more

Radio Show - A Year In Review

By Focus Blogger - December 15, 2009
On Tuesday December 15th the Catchdaflava radio show was hosted by Tazim, Abdulkarim and Azam. Our group spoke about various events that occurred over the year of 2009. We discussed the impact of these events, and how they relate to the youth of Regent Park in particular. We had an insightful talk on topics such as the Gaza conflict, Canada's involvement in Afghanistan, the war in Sri Lanka and the recent scandal involving Tiger Woods. We questioned the way the media and government highlighted and dealt with these occurrences. All of us had critical views on each of the topics discussed, and were deeply engaged in the show. However, for times sake, we had to cut it short. Be sure to tune in next time! - Abdulkarim, Tazim and Azam Listen Here!
Post a Comment
Read more

Starting October, Regent Park Focus established a children's Comic Book Program at Lord Dufferin School and began engaging kids in a collective creation of a comic book. The purpose of this club was to use the diverse artistic skills of the children, combining them to create a graphic book of a mixed genre. During the first few meetings of the club, the children focused on developing characters, and outlining their skills and character traits. These details manifested themselves into a dense story, which was drawn and written as it was being thought of. The drawings were put together by the group instructor, Dasha Yarova. Some of the characters were created by the group’s two volunteers, who also organized and directed the children. There were five children in the group, ages ranging from five to seven. Overall, the comic book club turned out to be successful, as the children were able to see the book they have created, and feel the power in their artistic hands to create a tangi
Post a Comment
Read more

Hi I'm Samira and I love the Divas! 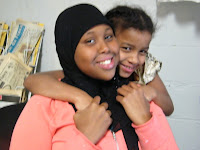 I'm apart of Diva Girls group held each Friday at Regent Park Focus. The group is dedicated to bringing the girls in the community together. In the past few months we've worked on a variety of things. Myia and Pat are the instructors but not too long ago we got a new person on the Girl's group team. Her name is Emmie and so far she has organized a lot of fun art activities for us. One project she made us do was collages and paintings. We were asked to to incorporate the pressure girls our age have to deal with into our art. This includes the pressure in looking a certain way, dressing a certain way, and just how much the media plays on our insecurities. Our collages were filled with the women and material objects society seems to think beautiful. A few weeks ago we planted tulips with Pink Tulips, which was very enjoyable for myself and the other participants. We learned a whole lot about these flowers; like that tulips like to freeze in the ground. Hopefully they'll
1 comment
Read more

The Diva Girls Group at Lord Dufferin and Duke of York P.S. 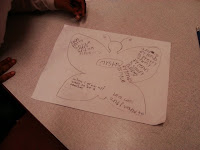 The Long running Divas Girls Group Program at Regent Park Focus has been incredibly successful. The program has given girls living in the community a place to socialize and explore their identities as racialized, young women soon to be entering the challenging world of teenagehood. In October, in an effort to meet the needs of more young women in the community, the program was expanded to two local schools. On Wednesdays the program is held at Regent Park Duke of York School. On Thursdays the program is held at Lord Dufferin. Both programs are coordinated by Emmie Carr, a Toronto artist. She is assisted by three York University teacher candidates, Kavita Persand, Marie Lee and Sara Cluer. There has been many wonderful and meaningful creative exchanges between young women in the program and the facilitators. Some of the issues that have being tackled were: self-esteem, body image, communication, and positive role models. One activity, led by Kavita, involved asking the girls who
Post a Comment
Read more 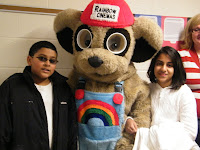 If you happen to stroll down the second floor hallway of Sprucecourt Jr. School you would be greeted with all sorts of posters, messages, pamphlets, illustrations and type written stories all on the theme of drugs. That’s because today is the judging of the Regent Park Focus Drug Awareness Classroom Door and Poster Competition and students were anxious to exhibit their work. The judging of posters concludes three weeks of educational drug awareness activities including a school assembly with panel speakers, a video screening, the creation of audio public service announcements and of course the making of posters and other art work illustrating the negative effects of drugs. Our panel of esteem judges for the day was; Barb Macpherson, representing Toronto Public Health; Lorna Blake, a member of the Regent Park Focus Advisory Committee; Brenda and Rainbow Bear from Rainbow Cinema; and two officers from 51 Division of the Metropolitan Toronto Police. The judges visited each of the partici
Post a Comment
Read more

By Focus Blogger - December 09, 2009
We did a radio show on the Pan American Games on Tuesday December 8, 2009. We didn’t have any guests on the radio show. We talked about the Pan Am games coming to Toronto in 2015, the construction of the new facilities for the event, how the event is a waste of money costing Toronto 1.3 billion dollars. The challenges for the radio show was making up the questions. We had to take a music break so we can provide the questions for the show. And also, there was a bit of delay due to the other radio show and also we couldn’t get into the station. By Ruhul Miah, Athrul Khan, and Saad Ahmed Listen Here!
1 comment
Read more

By Focus Blogger - December 08, 2009
Our December 1, 2009 radio show was about domestic violence. Did you know that Children under age five are more likely to live in a household where domestic violence occurs than are children in any other age category? Were you aware that children living with domestic violence are at risk for increased emotional and behavioral problems. In our radio show we explained what domestic violence is and discussed some of the causes. We also gave examples of where people can go for help. In the second part of our show we talked about the negatives of the price of TTC tickets increases. Some difficulties we had was we had to come up with things on the spot. For next time we will make sure we have extra words to talk. By Sabbir, Thisaan and Mohammed: Listen Here!
Post a Comment
Read more 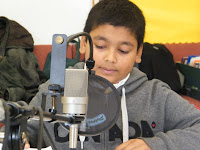 The Drug Awareness Classroom Door and Poster Contest is in full swing. The contest was announced at an assembly held a week earlier as part of the Regent Park Focus Drug Awareness Contest. Students are currently working with their classmates to research information on drugs and to design their classroom doors and hallways with creative posters and messages about the negative effects of drug use. The judging is to take place on the morning of December 10, 2009. As part of the Drug Awareness Program several classes were invited to take part in creating audio public services announcements (PSAs)on drugs. To inspire them, on November 19th, Regent Park Focus staff held a workshop at the school on making PSAs. At the workshop students watched and listened to videos and radio drug awareness PSA’s produced by Regent Park Focus in the past. After a short discussion about all the PSAs that were presented, students went back to their classes to research and write their own PSA scripts. On De
Post a Comment
Read more

The Kick Off of the 2009 Drug Awareness Program 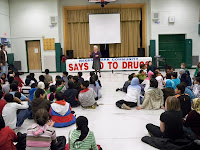 Each year Regent Park Focus organizes a Drug Awareness Program in partnership with one or more local schools. The goal of the program is to engage students in activities that increase their awareness about drugs. This year Regent Park Focus partnered with Sprucecourt Jr. Public School to put on three weeks of events where students could explore the implications of drug use and then share what they learned to others through art, music, drama and the creation of radio public service announcements. The following is a description of the kick off event. To kick-off the Drug Awareness Program at Sprucecourt school an assembly was held for Grade 4, 5 and 6 classes. The assembly took place on November 17, 2009 and it started off with a demonstration of break dancing by Lady Noize, a Toronto break dancer. Lady Noize engaged the audience in the importance of staying healthy by getting students to “flaunt their stuff” and get up to dance. After the dancing, three great guest speakers came
Post a Comment
Read more
More posts
All articles on Catch da Flava Online are copyrighten to FOCUS Media Arts Centre. Please contact us to ask permission if copying any material from this website.