Showing posts from March, 2017
Show all

Session 20- Getting Ready for the Showcase

By Regent Park Focus - March 24, 2017
This week the Diva girls continued to prepare for their final showcase performance. They continued to work on their poems and finalized them for their performance as next week would be dress rehearsal. The girls then went over some tips on how to perform on stage and they also did a word memory game to help them work on remembering their poetry. The rest of the session was spent working on video recordings and finishing up poems. By: Lysandra Lobo
Post a Comment
Location: 38 Regent, Toronto, ON M5A 3N7, Canada
Read more

By Regent Park Focus - March 20, 2017
Hello its Deondre from Catch Da Flava on Radio Regent, Oon Monday March 20th 2017, Jacob, Tavianne and myself hosted 20 minute radio show on the LGBTQ community, with Jordyn Samuels. We discussed some of the work Jordyn is currently doing with (SOY) , along with some of the stigma and fear for youth who come out as Gay. Interviewing Jordyn really opened my eyes to a different perspective of the LGBTQ community as well giving some great insight on what is like being an activist for the LGBTQ community. Tune in for our next radio show that will discuss a little bit about Black Lives Matter.
Post a Comment
Read more 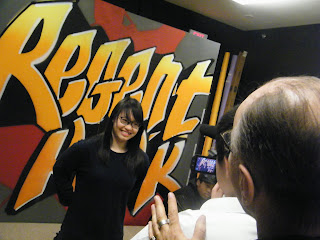 If you ask me how was my March Break I will tell you that it was boring, except for around 1pm to 5pm everyday, when I got a chance to experience my dream job. The first day I came to Regent Park Focus, I was overwhelm by how friendly, enthusiastic and professional everyone was. Along with that I felt a little bit shy because I had so little experience in any of the roles but everyone was so nice and encouraging. Monday, and Tuesday, I got to be in the studio and learned about the camera operation, the lighting, the audio, and the editing. Then Wednesday, the first day of filming, it was the only “break” of the week thanks to our executive director’s lateness with all the props. At that point, I can’t believe that we were actually filming a video, it was all like a dream to me. Then we took turns to act and film the rest until we realized that it was way too late. The next day was similar till the end of the week. Actually being in the studio film, I picked up a lot of tips and
Post a Comment
Read more 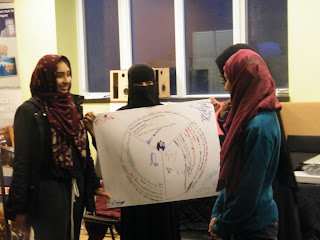 This week at the Diva Girls meeting, a guest speaker was brought in to share her poetry with the girls. Her poem was on religious culture and racism. After she shared her poem, the girls had a little discussion on why religion and culture is so important in society. Some Divas had experiences with what it’s like to be an accepted part of society while many did not know what that experience was. They went around in a circle and then talked about what makes them feel accepted and how society views them. The Divas then had a little activity where they answered three questions. They were split into two groups and the questions were “What does it mean to be a Canadian Muslim girl?”, “What is the most positive thing about being a Canadian Muslim girl?” and “What do you wish people knew about Islam” The Divas spent a lot of time on this activity sharing their thoughts on the questions and later presented their ideas to the rest of the group. After the break, they watched a video on Musl
Post a Comment
Read more
More posts
All articles on Catch da Flava Online are copyrighten to FOCUS Media Arts Centre. Please contact us to ask permission if copying any material from this website.