Showing posts from December, 2015
Show all

By Regent Park Focus - December 17, 2015
Last week, the ladies of the Diva's Media Group gathered together to discuss and brainstorm their upcoming media project. The goal was to underline an important topic for a public service announcement. There were recurring subjects such as the Muslim religion, Isis, hijabs, radicalization etc. Accordingly, the girls decided to narrow their public service announcement on the misleading perception and preconceived notions of Muslims. Their intentions were to highlight the current issues of radicalization within communities. The PSA is a scenario that shows the negative influence that the media and the community has had on the younger generation, leading them to follow in others footsteps by mistreating Muslims. The PSA will express the issues of this new epidemic. The Divas had the opportunity to share and add their input to the scenario. As we discussed and developed the screenplay, different character roles were separated within the group. As an initiative, the girls thought it wo
Post a Comment
Read more

By Regent Park Focus - December 15, 2015
With today being the final Catch da Flava radio show of the year, the team decided to keep things light and enjoyable. We chose not to focus on negative news, we chose to freestyle the show and it turned out great. We shared a lot of laughs and laughter is always good. We spoke about UFC 194: Connor McGregor vs Jose Aldo and whether it was a waste of money for people who paid to watch it. McGregor and Aldo were the main event and their fight only lasted about 13 seconds. Do people pay for a good fight? Or a quick 10-second knock out? Today was also the first day that grocery stores in Ontario could sell alcohol. Not all groceries stores are participating, however having alcohol available at grocery stores could be convenient for people as well as damaging to store owners and the surrounding communities. On a similar note, Premier Kathleen Wynne believes that marijuana should be legalized and only sold by the LCBO. Is this a good or bad decision? What will legalization mean for the t
Post a Comment
Read more

By Regent Park Focus - December 15, 2015
Catch Da Flava On tonights Catch Da Flava, we had a special 30-minute interview for our Youth at Work Safety segment. We had two guests; Catherine is a lawyer with the injured workers consultants and Heather who is a victim of workplace injury and also works with and advocates for injured workers. Heather actually had a very unique injury due to the fact that she has an invisible injury. Heather had a tough experience with workers compensation because it is hard to prove that her injury was something that came from her place of work. It is usually easier to receive compensation if you have a visible injury such as, a broken arm or leg. Catherine explained some of the hidden details in workers compensations rules/policies and what is being done to change workers comp to accommodate invisible injuries. Later on in the show, we talked about more Donald trump! Usually the only time we talk about the same topic nearly everyweek was with Uber, but these days news on uber has been quiete
Post a Comment
Read more 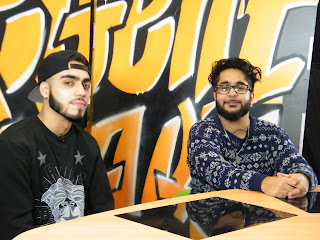 The Crossroads Punjabi Cultural Show Blog On December 8th we had our first Crossroads with Punjabi Cultural show take place. We had a guest on our show who calls himself SB, who is upcoming musician within the Punjabi community. The music SB creates in the category of Rap/Hip-Hop music. SB has been making music for a few years as he was explaining his story of high school having a huge influence on him creating music. SB is from the Punjabi descent and emphasized that his diverse cultural had a huge impact on his music in a positive way. SB told us a story about his first musical experiences with his friends which lead him to record his first song. We also discussed the current issues of the state of Punjab in India. SB mentioned how music can be empowering and in sense advocate for social issues in India. Later on in the show we talked about how the government in India started funding programs that supported arts & culture programs. We concluded on how powerful music can be and
Post a Comment
Read more
More posts
All articles on Catch da Flava Online are copyrighten to FOCUS Media Arts Centre. Please contact us to ask permission if copying any material from this website.