Showing posts from November, 2013
Show all

The Diva’s Talk about Canada and Human Trafficking

By Regent Park Focus - November 30, 2013
There are many misconceptions about what happens in our country and h ow we relate to other countries. In Canada we frown on countries such as Japan, the Philippines and Thailand for their high involvement with human trafficking and sex trafficking. Canadians are one of the world’s highest sponsors to the prevention of child abuse and human trafficking worldwide but many Canadians fail to see that Canada also has high human trafficking rates including human sex trafficking, human slavery and human selling.   On Friday 22 nd 2013 the Diva Girls talked about the serious topic of human trafficking in Canada and the recent discovery in London England of the three women trapped into slavery by an English couple.   But incidents like these do not just happen across the ocean, it happens in Canada everyday. Organizations such as the Canadian Women’s Foundation work to help young girls and Trafficking survivors back to their normal lives and families. According to the CWF some of the contr
Post a Comment
Read more 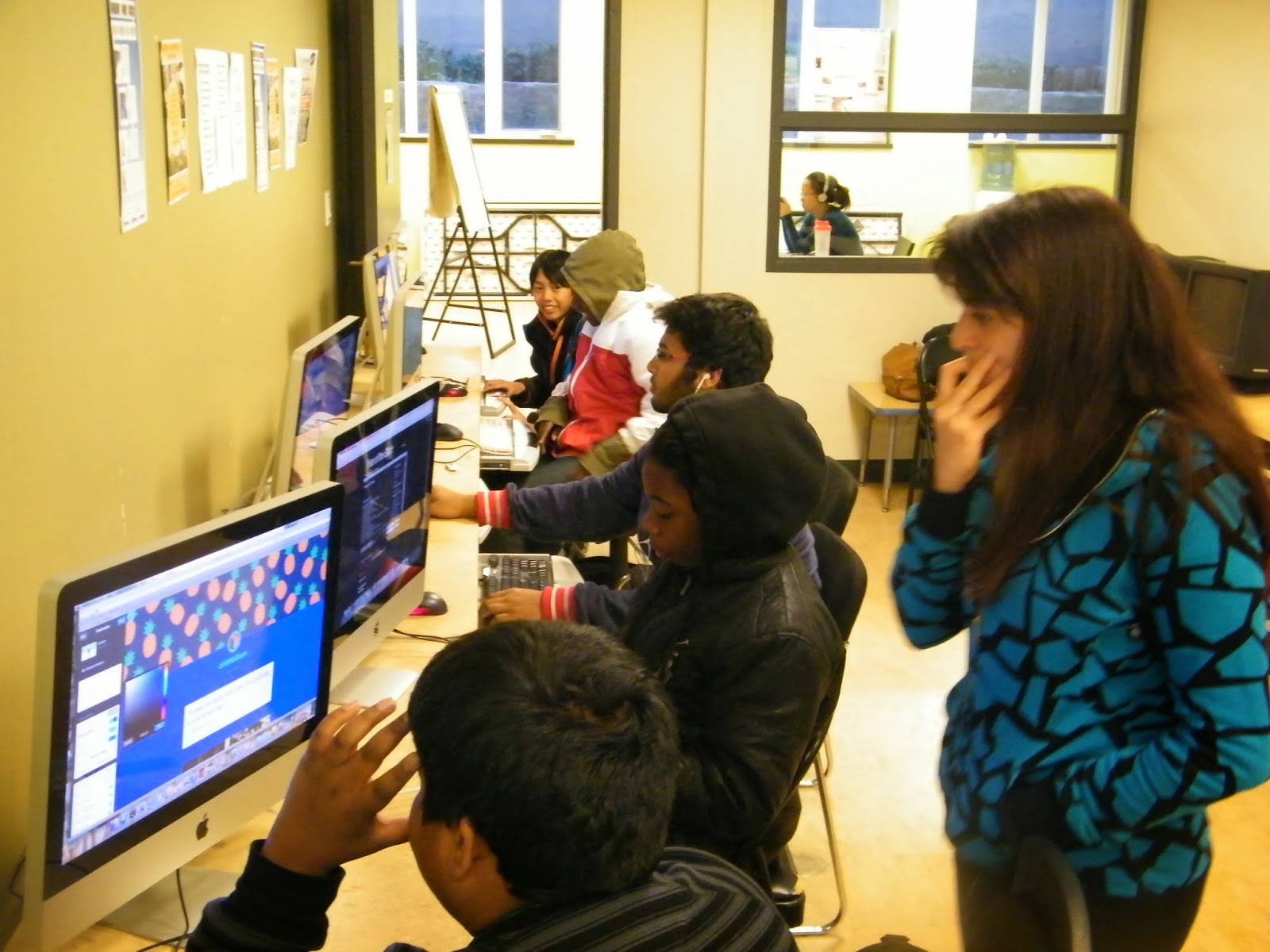 We are excited to announce that we have completed our second week of our 4 week computer workshop. This is scheduled to happen every Tuesday, in the media lab from 4:30- 6pm. The first week began with an introduction to building your own website.The kids each designed and customized their personal pages on Tumblr, adding images and videos along with other decorative creations. They then ended the workshop by posting instructions as to what they had learned and steps for others to make their own Tumblr pages. I must say, each participant did a great job having their page reflect who they are and interests they have. Last week marked the second lesson in our computer workshop. We were able to build upon our lesson last week and add to it this week with a look at coding. The participants were given the opportunity to look at websites in a more technical manner. Coding involves giving the computer basic commands or codes that allows you to edit the webpage in detail. At first glance,
Post a Comment
Read more 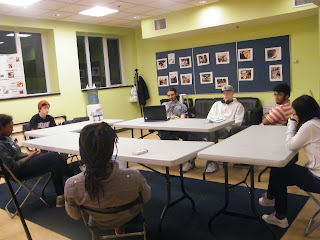 Regent Park Focus is partnering with a group of University of Toronto students to produce a media series exploring multiple faiths and religions. Over the course of 10 weeks youth will interview religious leaders in the community and get an understanding of the different cultures, values and lifestyles that make Regent Park and Canada so spiritually diverse. The interviews will be documented in the form of two radio shows and eight television programs, which will be available at RPTV.  At this weeks’ meeting, the Inter-Faith program team prepared for an upcoming interview with a member of an LGBTQQ (Lesbian, Gay, Transgender, Queer, Questioning) Islamic community. The youth divided up the various roles required for production, reviewed how to conduct a good interview, and learned how to produce, direct, and film a TV show. The youth also took a vote to choose which religion to focus on for the next episode, deciding on the Unitarian Church. By: Adaku
Post a Comment
Read more 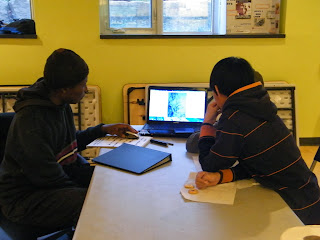 The Regent Park Focus facility welcomed animation designer Jude to our family. Jude will be coming in on Thursdays to teach kids about different animation programs and how to use them to creatively send a message about social issues and other topics in their society and lives. The 14 th however was an introduction into the future programming which included looking at finished products, and how they were designed. Youth can be signed up for this program which will be held every Thursday from 4pm-5:30pm, snacks will be provided as well as rewards for those who attend. Space is limited and is offered on a first come first served bases.    This program will be offered at the regent park focus in the media lab and include programs like After Effects, 3D sculpting, etc. The kids today got a first hand view on what it is like to be an animator and the kind of work and dedication that goes into producing even a short film. The youth seemed most excited about the creative freedom the
Post a Comment
Read more 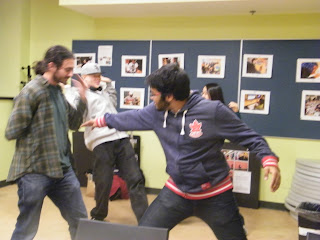 Five youths came together to talk about the production of   two ten minute television shows, one about an LGBT accepting mosque and   another about the Chinese Christian Softball League. First we talked   about the potential for faith based sports such as the softball league,   and their possible capability for fostering community. We then talked   about some of the gender dynamics within Islam concerning leading and   taking part in prayer. This led to the discussion of the therefore   inherent difficulties incorporating people identifying as neither male   nor female into prayer. By: Milo Golub
Post a Comment
Read more

Dove and The Divas 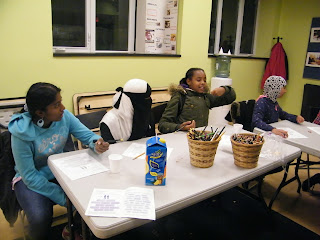 The Diva Girls did the Dove workshop, which focused on issues such as body confidence, self-esteem and inaccuracies in the media. Each member of the Diva Girls filled out work sheets that required critical thinking about how they feel about their body images and how they cope with self-esteem issues. Exploring these issues help boost confidence mentally and generally giving them the ability to public speak, try out for teams and make new friends. These also help with metal hurdles the Diva Girls may face in day-to-day life whether that is bullying, stress or just in general sadness, remembering that they are beautiful and have self worth helps give them the tools to overcome every obstacle. The first work sheet asked the Diva Girls what gave them confidence, many answering that a combination of family and friends helped them through times of doubt or low self-esteem. This was a great way to remind the girls that many people find them beautiful even when they may not feel beautif
Post a Comment
Read more 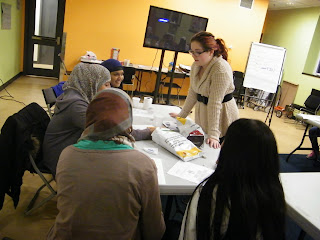 Friday, November 1 st 2013 the Diva Girls meeting started with conversation around how their Halloween went and their plans for November. May of the girls, sporting bags of candy, expressed they had fun Halloween celebrations even if they hadn’t been out and about with the ghouls and ghosts. The girls also talked about how their day had been at school and recent books they read. The conversation took a serious turn when the youths got into their “what happen in the week” topic which was gun violence. Less then a year after the Sandy Hook Middle School and several years after Columbine High School another middle school shooting occurred in Nevada, USA. The shooting left one teacher and the shooter dead, and rocked risky debate over a controversial bill passed in Texas, Oklahoma, and soon Indiana that allows and expects teachers to carry guns in class in case of an active attack. The Diva Girls listen to each of the events in which and active gunman entered each school and
1 comment
Read more
More posts
All articles on Catch da Flava Online are copyrighten to FOCUS Media Arts Centre. Please contact us to ask permission if copying any material from this website.