Showing posts from October, 2016
Show all

By Regent Park Focus - October 28, 2016
This week at the Regent Park Focus Divas Media Group Program, the Divas were introduced to the concept of the media representation of the body and gender as a social construct. The Divas used images from magazines and social media to challenge societal expectations about body image; emphasizing the ways in which race, religion and ability are commonly represented. This activity helped the Divas to deconstruct the social concept of “beauty” and representation of the “body”. The Divas also watched spoken word videos about body image. These videos gave the Divas a different perspective in terms of how/what they think about their bodies. This was followed by an exercise where the Divas were able to use their creative thinking to create and perform spoken word poems about what their body would say if it could speak. - Titilola Onogu
Post a Comment
Read more 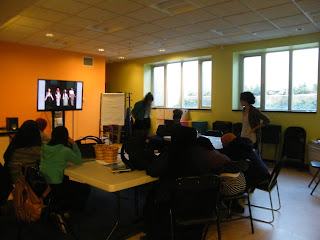 Divas Media Group Blog The Regent Park Focus weekly Divas Media Group Program resumed on Friday 14th October, 2016. The Divas were back to having an exciting experience as usual. In this season of the Divas Media Program, the Regent Park Focus has a different plan for the Divas. We have lots of games, fun and exciting activities for the Divas to make their learning experience worth their while. The season started with a ‘spoken word’ series which would go on for a couple of weeks. The spoken word serious would be facilitated by two female professional spoken word artists. In the first class of the spoken word series, the Divas were excited about the art as some of most of them had never written a poem or performed the art before. The Divas were introduced to the art of spoken word, played games, got to know each other, watched videos on spoken word performances and eventually got a chance to create and perform their own spoken word. They all described their experience at the end of
Post a Comment
Read more

By Regent Park Focus - October 21, 2016
This week at the Divas Media Group Program, the Divas explored gender norms and girlhood. Through forum theatre and spoken word videos, the Divas analyzed media representations of gender and femininity. This activity helped them gain a deeper understanding of the gender binary and learn about a range of gender identities, including gender-fluid and trans-identities. At the end of this session, the Divas composed their first poetry that challenges labels and addresses the themes of girlhood and femininity. It was an exciting session for the Divas.
Post a Comment
Read more

Session 1: Introduction to the art of spoken word

By Regent Park Focus - October 14, 2016
The first fall session of the 2016 Regent Park Focus Divas Media Group Program began on Friday 14th October, 2016. As well as games and exciting fun activities the focus of the fall Divas’s program this year will be on spoken word workshops. The spoken word workshop series will be facilitated by two female professional spoken word artists; Ayla and Londzo. In the first class of the spoken word series, the Divas played games and got to know each other. Then they were introduced to the art of spoken word. This involved watching videos on spoken word performances and eventually getting a chance to create and perform their own spoken word poetry. The Divas participants were excited about the art as some of them had never written a poem or performed the art before. They all described their experience at the end of the day as exciting.
Post a Comment
Read more
More posts
All articles on Catch da Flava Online are copyrighten to FOCUS Media Arts Centre. Please contact us to ask permission if copying any material from this website.