Showing posts from February, 2012
Show all

By Focus Blogger - February 27, 2012
As a volunteer, I taught the Poster Design program during Fall 2011 and now the program has been partnered up with Comic Life. The children were designing posters digitally, using Adobe Illustrator and images from the internet. Some of the topics they covered were about healthy habits, safety, and people who inspired them. When I first started, I didn’t really know how to start introducing them to a program they had probably not encountered before so I let them choose what they wanted to make their posters of and then gave them themes to work with. In working with new media, the children that participate are learning a new program that can help them with future projects. Nicole Connors
Post a Comment
Read more 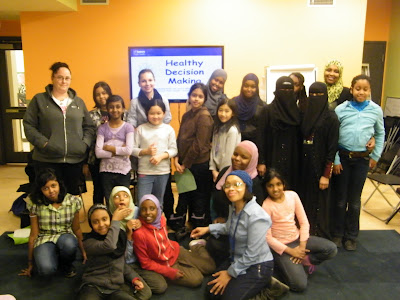 My name is Hani; I am a student from George Brown College in the Community Worker Program.  I am a coordinator in training, with in the Divas Program at Regent Park focus.   The program is for girls between the ages of 11 to 16 years of age and it happens every Friday. We had a couple of new girls who were interested in the Divas program.  This Friday February 3, the girls came together and did educational workshops about healthy decision making with Public health Nurse (Tina). Before Tina began, the girls enjoyed a healthy snack.  Furthermore, they discussed how to make healthy decisions. The girls were very involved with activities that Tina created for them.  They discussed the six steps to decision making/problem solving.  For example, the first step they discussed was “ Identify and define the problem.  Consider what an optimal outcome or goal might be.”  Second step was to “list possible options/alternatives or choices.  Third step was to “evaluate the options and gather infor
Post a Comment
Read more

By Focus Blogger - February 24, 2012
Last Friday for February was awesome! Not only was it fun because Rainbow Cinemas and Rainbow Bear showed up but we also had incredible performers! We started off the night with some Sri Lankan food which included kothu roti, samosas, and noodles with veggies, shrimp and chicken. We had had some chocolate chip cookies courtesy of radio show host Paul Corby. The first performers were Projonmo. Projonmo, featuring Shawrov, Ka-Z,Tamim, Rahin and Ajhar is the newest craze to hit your speakers. Infusing both English and Bengali hip-hop/r&b/rock together to bring a new sensation to your ears. However, opportunity presented itself in the form of Retuned. As time went on, he was introduced to Ka-Z, who was a fellow aspiring Bengali artist.With time, came new faces. Tamim, a classmate of Shawrov's was particularly impressive on the guitars. Ironically it worked out that Tamim somehow ended up being Ka-Z;s neighbor, completing the trio. In 2011, there was the addition of a much awai
Post a Comment
Read more 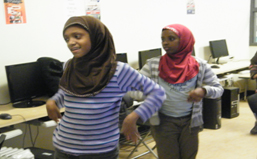 Hey it’s Paige here again, In case you missed my last blog, I am a George Brown Student, studying Community Work. I am doing my placement here at Regent Park Focus. This Friday at Diva Girls there was a pretty good turn out considering some of the girls were unable to make it. Due to the fact that it was a P.A day for the girls in middle school, we started the program at 2 and ended at 4; the downside being, the high school girls didn’t make it! Friday the 24 th , we are holding Last Friday and the Diva girls are going to be participating in it, by doing a poem or a skit. So to get the girls brains going, when they came in we got them to reflect in their journals about Black History Month and how it affects them, positively or negatively. They could also reflect on somebody who they feel should be recognized as a good role model or an important person within Black History Month. Once everybody arrived and wrote for a few minutes, we did a fun icebreaker activity to get to know ea
Post a Comment
Read more

By Focus Blogger - February 05, 2012
I really enjoy volunteering for Catch da Flava Radio show. It’s a great way to discuss current events and to educate listeners on issues that matter. I think the group on Wednesday is a good group they offer a lot of variety and different p erspectives. Finding ways to explore the issues ways in which I had never thought. Even though I research the topics a head of time I feel like I learn more through our discussion. I am always impressed how remarkably creative and insightful are the youth that participate in the show always offering new and fresh perspective. Best of all, however, is when we have guest to interview. I always find our guest interesting and filled with knowledge and the issue we discuss are important to the community and youth the same. It’s always great to get a first hand perspective from those interviewed. David Cormier
Post a Comment
Read more

By Focus Blogger - February 05, 2012
My name is Xavier Luxenburg and I’ve been working with Regent Park Focus on the Catch Da Flava Magazine. I’m a Bachelor of Education student at York University Regent Park site. My job at Focus is to facilitate students in the program by helping them write articles and improve writing skills. Our current goal is to publish an issue on the topic of multiculturalism once we get enough articles from youths in the area. When I started in late September of 2011, I did not know what to expect. As part of my programs requirement, I needed to volunteer 40 hours in a community-run organization. I chose Focus because I liked the idea of making youths more knowledgeable on media arts.  Regardless, I needed the hours to graduate but I found myself in a welcoming environment. The staff is pretty chill and the youth I’ve worked with are really great.             However, the last few months have been a bit of a challenge. Overall, attendance has not been great mainly because people have other
Post a Comment
Read more

By Focus Blogger - February 05, 2012
Hi there, My name is Laura and through York University’s Regent Park teaching program, I’ve had the opportunity to volunteer in Regent Park Focus Youth Media Arts Centre computer lab. Here, I’ve had the chance to meet youth from the community in a more relaxed after-school setting and introduce them to interactive programs including Comic Life. In the computer lab, kids have the chance to build their own storyboards with both images and words using MAC software. Not only do they have the opportunity to learn skills using the latest technology and become more media literate, but they have the chance to share their personal stories and own ideas with their peers and community. Since September, we’ve grown the program and taught different aspects of technology to kids aged 7-18. In December, we launched a contest to reward kids for their efforts. The resulting entries were amazingly creative and all those who participated received movie tickets to the neighborhood cinema. The c
Post a Comment
Read more

By Focus Blogger - February 05, 2012
Regent Park Radio,2011 in perspective! Starting October 2011, I signed up at Radio Regent as Volunteer coordinator. It was all new to me.  I was excited to be volunteering at an organization that used media to engage youth. A half an hour show on internet radio every Tuesday. Our core  participants are Jerry, Fatima, Tresvonne, Emmanuel and  Michele. I had much to learn from the pros.  The first few sessions we went with the flow.  The participants addressed a variety of issues they were interested in and spoke naturally and freely about these topics.  There is a great deal of energy in the sound booth, the jokes, the bloopers just add to the fun we have. Like they say it’s the journey that counts!   A few weeks into the show it was decided to change the format and give it a little more structure, yet keeping the openness and energy.  The format consisted of a Main Topic, something usually in International/National news that participants wanted to talk about. We spoke about th
Post a Comment
Read more

By Focus Blogger - February 05, 2012
Hello everyone, First of all, I would like to start by saying how much I enjoy and feel proud to be a part of the Regent Park Focus programs. Ever since I set my foot on the Focus door back when it was at the Dundas street location 6 years ago, and I was a placement student, I knew then that this is the place I want to work in and grow with the organization as well. I had pictured a great environment to help the kids at risk with great mentoring and assisting them with their creative talents and teamwork skills. I was put in charge with the Media Lab supervision, Comic Arts instruction, and my most favorite of all, the Radio program in which I was the Radio Coordinator of the 'Catchdaflava radio'. Catchdaflava radio has been delivering as always the topics of global, social, political, and entertaining issues . In this program I had the privilege to work with the youth and the volunteers to coordinate with the radio show as well. Working with Zeebe and David is
Post a Comment
Read more

A Friday night – with the Regent Park Diva’s

By Focus Blogger - February 05, 2012
My name is Paige, and I am a student at George Brown College. I am studying to become a community worker, and right now I am doing my placement here, at Regent Park Focus. Today is my first day on the job, and tonight is my first night being apart of the Diva’s girls group.  Many girls showed up for the group, and even though all the girls faces were new to me; there were a few girls that were new to Regent Park Focus, Diva Girls Group.  The girls enjoyed snacks and drinks while out volunteer Heidi taught them how to knit scarfs, one at a time. Heidi put together a bag for each girl to take home; it included knitting needles and different types of yarn. A few of the girls blew me away and knew exactly what they were doing, and many of the girls (un like myself), caught on to knitting and the technique right away. Everybody enjoyed knitting and the time they spent with Heidi so much that Heidi was asked to come back next week for the first hour and continue to help the girls with the
Post a Comment
Read more 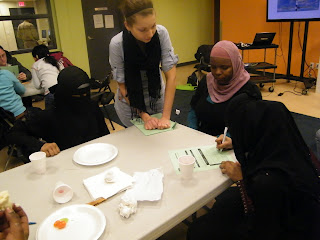 My name is Hani. I am a student from George Brown College in the Community Worker Program. I am a coordinator in training, with in the Divas Program at Regent Park Focus. The program is for girls between the ages of 11 to 16 years of age and it happens every Friday. We had a couple of new girls who were interested in the Divas program. This Friday, the girls came together and did educational workshops about healthy decision making with Public health Nurse (Tina). Before Tina began, the girls enjoyed a healthy snack.  Furthermore, they discussed how to make healthy decisions. The girls were very involved with activities that Tina created for them. They discussed the six steps to decision making/problem solving. For example, the first step they discussed was “ Identify and define the problem. Consider what an optimal outcome or goal might be.” Second step was to “list possible options/alternatives or choices. Third step was to “evaluate the options and gather information if
Post a Comment
Read more
More posts
All articles on Catch da Flava Online are copyrighten to FOCUS Media Arts Centre. Please contact us to ask permission if copying any material from this website.