Showing posts from December, 2016
Show all

By Regent Park Focus - December 09, 2016
This week at the Regent Park Focus Divas Media Group Program, the Divas were presented the opportunity to record a poem and share using film, radio or perform at an event. To do this, the Divas would have to create new poems or choose from those they had created in the past sessions. After this information was passed, the Divas were asked to express how they felt about the idea in terms of readiness, whether they would like to record and present and how confident they were about sharing their poetry. Some of the Divas appeared to be excited and enthusiastic about the idea, some said they were nervous but had confidence they could pull it off, others said they would record a poem if they feel confident about their poems and one Diva said she would feel shy to face a crowd, could change her mind eventually but might consider doing a radio recording. These mixed feelings are totally relatable but what is great about this is, being brave enough to share their feelings. In this session, Ay
Post a Comment
Read more

Session 7: My Body, My Own: Celebrating our Unique Bodies (Part 2) 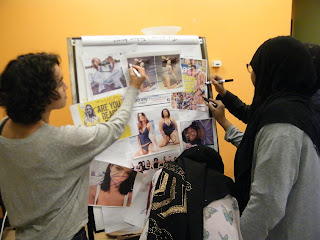 This week at the Regent Park Focus Divas Media Group Program, the goals of this session are the following; (1) to make the Divas feel positive about their bodies; (2) to celebrate the difference/unique qualities of their bodies/things society normally doesn’t celebrate; (3) to touch on self care/loving and caring for the body just as it is. A recap of the previous week was done as the Divas passed the circle rock and described what they had learned through the program and the things that stood out for them so far in the ‘Celebrating our Unique Bodies’ session. This exercise was a refreshing way to begin this session as it made the Divas feel relaxed and set for the day’s activities. In today’s session the Divas watched and reflected on two spoken word performances; “Body Love” – Mary Lambert and “For the Body” – Ruby Francisco. After this exercise, the Divas were allowed to use their personal reflection of their bodies in writing. The writing prompt says: A love letter to my body
Post a Comment
Read more
More posts
All articles on Catch da Flava Online are copyrighten to FOCUS Media Arts Centre. Please contact us to ask permission if copying any material from this website.