By Regent Park Focus - February 03, 2020
Today (Monday, February 3rd, 2010) was the third week of the Diva's and U of T students program. The group enjoyed good healthy snacks and got working right away. As it has been said before, the group will focus on the topic of Faith, Religion and Spirituality. Their media projects will reflect on those topics and how they play a role in the community and individuals. To get some ideas for the project, there were two studies that were shown today:
A 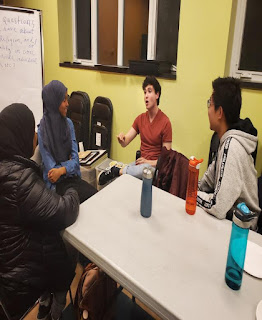 fter that, everyone divided themselves into smaller groups and examined, discussed and presented either one of the case studies. Conversations also focused on personal views of religion, faith and what spirituality means to them. At the end everyone presented their ideas and some chose to open up about their own views of these topics, more specifically their experiences with religion and how other people's view of it has impacted them.

Since the community of Regent Park is known to have a high population of multi religions, some in the group were able to relate to these stories and bring awareness to the issue of discrimination. The program ended in a general discussion bringing everyone closer and getting to know each other more. Today was a very informative session and many left with the awareness of how religion affects their daily life and how the community sees the need to increase more awareness. Next week, they will be working more on their media projects ad building ideas for what they want to do regarding these topics.
#UofDivas Divas Young Womens Program

By Regent Park Focus - January 14, 2019
Jenna Borisevich January 14, 2019 POLITALKS – Suze Morrison Blog Post In this new segment of Politalks, Jason Clarke welcomed Suze Morrison back into the studio for another interview at Regent Park Focus Media Arts Centre. Suze Morrison is currently a member of the Ontario New Democratic Party, representing the riding of the Toronto Centre. Having now worked in office for several months, Suze was able to provide us with a lowdown of her experiences since being elected as well the ongoing challenges she is attempting to confront. Listen to the full interview to hear about Suze speak about her greatest priorities for the Regent Park community, her take on carding, her opinions on intersectional feminism, women in politics and Ford’s decision to cut finding to the College of Midwives of Ontario, as well as some tips around self-care during this politically trying time. Please click on the following link to view the interview: LINK HERE ONCE AVAILABLE For
Read more

By Regent Park Focus - July 24, 2019
Catch da Flava’s topic for our third week was abortion, from how to get an abortion in Canada, the Unplanned pro-life film, and people’s personal opinions about pro-life and pro-choice. The hosting was done by André and Iman since I lost my voice, but I was still there listening to the conversation. Our 11 am to 12 pm timeslot was slightly hijacked in the beginning by our guest Minerva Navasca, who wished a very happy 19th birthday to our other guest Lorena Florea. Happy birthday Lorena, you’re finally 19! After we got the show back on track Minerva and Lorena gave their opinions about being pro-choice, and how the pro-life side is adapting to the times. We also discussed the Unplanned movie, an adaptation about Abby Johnson’s switch from pro-choice to pro-life. After Lorena and Minerva, we had Carolyn Egan from Abortion Rights Coalition of Canada to answer some questions about the current abortion system in Canada and what their organization is doing to help women. Carolyn also
Read more

Camping with the Divas Girls Group

This past week the girls group headed to Guelph for a three day retreat to celebrate the end of this year’s program. It rained almost the entire time, but we still managed to have a great time! For many of the girls it was the first time they had been out of the city. They were excited to go canoeing, take part in a scavenger hunt and spend time in the conservation area exploring and drawing in their sketch books. Because of the rain we also came up with lots of creative ways to have fun inside. We painted tote bags, learned to cook lots of delicious food, and put on a “Kids Canadian Idol” show. The girls all said they wished the trip could have been longer and were already planning next year’s trip on the way home.
Read more
All articles on Catch da Flava Online are copyrighten to FOCUS Media Arts Centre. Please contact us to ask permission if copying any material from this website.