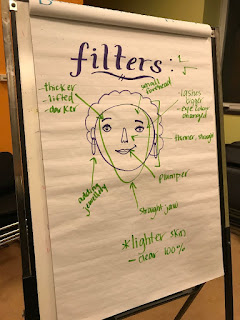 On November 22nd, the Diva’s Girls Program met to discuss social justice issues regarding a movie called, “Miss Representation.” The purpose of the program was to debate whether the representation of women in the media has gotten better or worse since the movie premiered in 2011. The Diva’s were divided into two teams based on their beliefs. The girls who thought the representation of women in the media improved said it was because they think women are dominating the music charts, more recognition in film, more examples of women in sports, men identifying themselves as feminists and more people embracing the word ‘feminist’. The girls who believed the representation of women in the media is getting worse, said it was because there are many missing girls, the damaging impacts of the Kim Kardashian effect, sex sells in the music industry, there is pressure to wear makeup and use dating apps, and finally the comment sections on social media platforms. The Diva’s engaged in a well thought out debate where they had 2 minutes to present their arguments.
After the debate, the facilitator drew a picture of a female on chart paper. The Diva’s were tasked to identify what a filter on Snapchat or Instagram would do to alter the face. They mentioned that her eyebrows would be thicker and darker, it would make her lashes fuller and longer, straighten her jaw, plump her lips, and make her skin lighter with no pimples. The girls were able to notice the damaging impacts filters can have on body image for young girls engaging in social media. Some solutions they came up with were to embrace your differences, as well as young girls should not use social media unless under supervision.
Divas Young Womens Program

To learn more about Jessie’s Centre and/or the Community Education Program, please visit:
Read more
All articles on Catch da Flava Online are copyrighten to FOCUS Media Arts Centre. Please contact us to ask permission if copying any material from this website.