Today was the first day of the Diva's program for this year. The girls came in with vibrant energy and were excited to be back and to see each other. The group socialized and ate some snacks before gathering in a circle to start today's program. 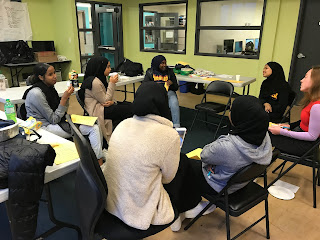 It began with an ice breaker game called "Two Truths and a Lie", where the girls opened up about what they did over the summer and what they are looking forward to for this session of the Diva's group. After going around the circle, the CANVAS instructor, Twoey, pulled out two large pieces of paper: one had social justice issues the girls want to tackle and the other one was arts based practices to tackle those issues. For example, the paper said topics such as Islamophobia, racism, love and relationships, body image and many others, and the girls circled which topics they wanted to discuss further. Then, they had to circle which arts based practices they wanted to do which included painting, dancing, blogging, podcasts, along with others.

It seemed as if the girls wanted to tackle Islamophobia and racism with arts based practices like painting and dancing. The final activity was making a book called "Who I Am and Who I Am Not" about themselves.

Overall, the first session with CANVAS was a lot of fun and allowed the girls to step outside of themselves and see each other for who they really are, which is smart, powerful, friendly, and confident diva girls!

Catch da Flava’s topic for our third week was abortion, from how to get an abortion in Canada, the Unplanned pro-life film, and people’s personal opinions about pro-life and pro-choice. The hosting was done by André and Iman since I lost my voice, but I was still there listening to the conversation.

After Lorena and Minerva, we had Carolyn Egan from Abortion Rights Coalition of Canada to answer some questions about the current abortion system in Canada and what their organization is doing to help…
Read more