By Regent Park Focus - August 07, 2019
Our fifth radio show on Catch Da Flava was taken over by myself, Vanessa. I kicked the other guys out to have an all girls show (with Matthew Avolio coming in as a later guest) with my fellow girls. I had Minerva Navasca and Lorena Florea with me from 11 am to 12 pm to spill the tea. 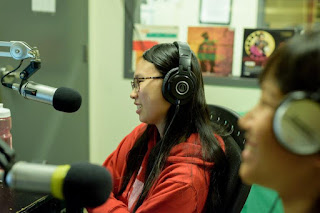 Opening with Run the World by Beyoncé, our conversation started off hot with discussions about the inequality of how women have to constantly buy products for periods when men get condoms for free. We also discussed false information about periods, how the blame is often heavily placed on the woman when accidental pregnancies happen, and the statement “women who wear revealing clothing are asking to get raped”.

After listening to 7 Rings by Ariana Grande, we continued our conversation with Matthew to provide a guy voice during our ranting. We discussed cat calling, men commenting about women and guys playing the victim when being rejected by a girl. With a quick break to Demi Lovato’s Confident, we continued the conversation by discussing mansplaining and Asian Boss’s video about Japanese men preferring girls who are cute and will hold back their opinion with a man.

The overall message of this whole show was as Lorena said to just be yourself. And the message was wrapped up nicely with the show ending to This is Me from The Greatest Showman.