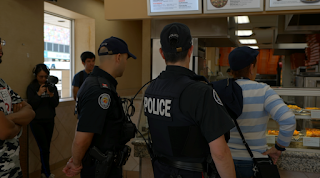 Our second last week at Focus was an eventful one. The beginning of the week was filled with editing for our Criminal Harassment and Neighbourhood Police videos. Wednesday was the most exciting day. Over the weekend, a bunch of Focus members participated in the 24 hr Film Challenge by TIFF. Wednesday was the screening where 18 films were shown on the big screen, including Focus’s own film “Sweet Deal”.

It was so amazing to see the wide variety of entries, and how creative people were when implementing the required shots and props from TIFF. Even though Focus didn’t win, the bonding experience the team had and the final product is something they are proud of. I will definitely be part of that team next year.

But we also had a bit of filming this week too. We had two interviews with Julie Fiddes from the Women’s Shelter discussing their role in helping victims of criminal harassment. Our big filming session was filming Rob and Amber on their patrols in the gay village and St. James Town. We got a great perspective on their duties and got a little more action than we bargained for, but it was still a really great filming session.